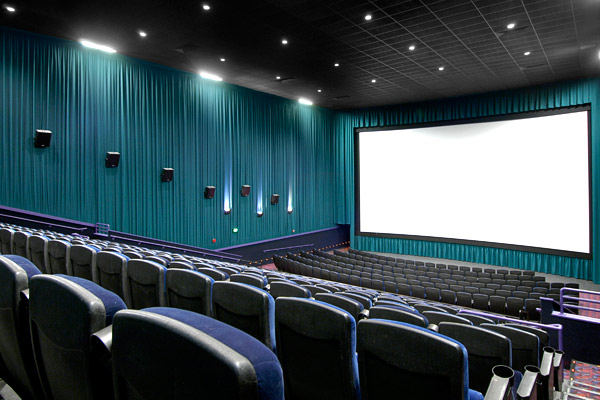 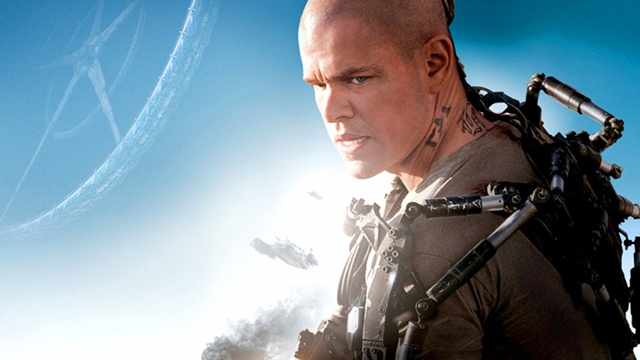 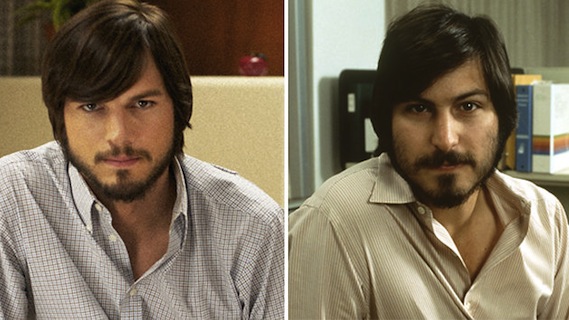 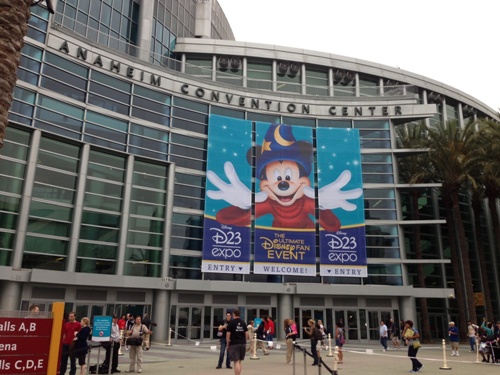 With a media giant like the Walt Disney Company continuing to expand their reach into many different areas of the entertainment industry, it’s no wonder that they would put on a grand exhibition to show it all off.  Started back in 2009, the D23 Expo is the ultimate showcase for Disney fans of all kinds.  Within its home at the Anaheim Convention Center, which is conveniently across the street from Disneyland, you will find a show floor full of pavilions devoted to every conceivable department of the Walt Disney company.  From the Animation departments, to the Theme Parks, to television stations like ABC and Disney Channel; all of it can be found at D23. The Expo is held bi-annually, and I myself have missed the previous two opportunities to attend. This year I was determined to make it.  Unfortunately, my work schedule relegated me to just one day, and lack of pre-planning kept me from experiencing the biggest presentations at the convention.  I did manage to get a pretty good overview of the pavilions on the show floor, many of which were impressive and well worth visiting.  Along with some pictures I took inside the convention, this is my report of the sights and sounds of the 2013 D23 Expo. 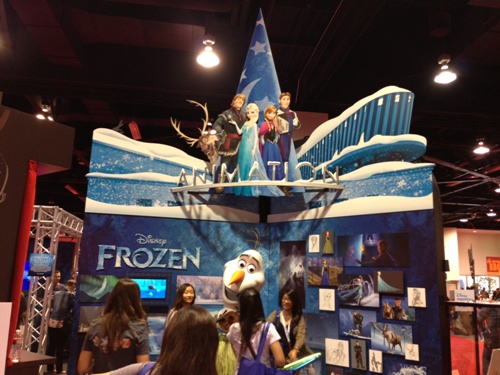 D23, for those who are unfamiliar, is a fan club run by the Disney company.  Anyone who becomes a D23 member gets special insider perks and access to events related to Disney and all its subsidiary parts.  This Expo is the biggest such event, and while D23 members are given priority at the convention, the show is still open to anyone.  Once there, you are brought into the main show floor, which is quite expansive.  Even though the Expo covers an impressive amount of real estate on the main floor, it still only filled up a fraction of the Convention Center’s total space.  Front and center is the Coca-Cola sponsored stage, where various small music acts performed throughout the day.  Nearby was the Expo’s own Disney Store, which had a line that could rival anything at the park across the street.  Around the corner were special art pavilions highlighting the different media properties of the Disney company; such as Marvel and Star Wars.  Disney Animation’s pavilion highlighted the upcoming animated feature Frozen, which is coming to theaters around Thanksgiving weekend.  ABC’s pavilion highlighted its own fairy tale series, Once Upon a Time, with a mock up of Captain Hook’s ship. 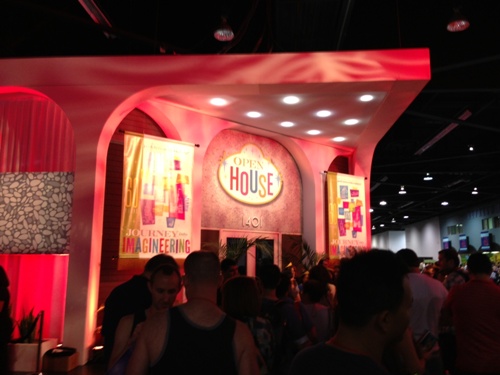 The largest pavilion, however, was devoted to the Imagineering department of the Walt Disney Company.  This impressive section was constructed to appear on the outside like the Imagineering building in Glendale, California, complete with a front door entrance that all guests had to enter through.  Past the front doors was a small foyer with a large projection screen.  What follows in this room was a small pre-show that was so well executed, it could’ve been at home in one of the parks on its own.  The show concluded with the opening of some automatic doors that lead into a show floor, highlighting all departments within Imagineering.  Each section of the pavilion covered areas such as Research, Development, Modeling, Engineering, Construction, and even Landscaping, all with actual samples of the Imagineers own work.  Many of the displays featured things I had known about, but have never seen in person, like the original concept drawing of Disneyland. There were also things on display like an early concept model of Spaceship Earth in Epcot, which featured a much different layout than the one that exists today; something I hadn’t seen before.  The pavilion also had a fun Animatronics section, where you could actually take the controls of an Audio-Animatronic parrot and animate it live.  There were only hints of things to come in the future at the parks.  One new thing that was revealed was the announcement that Marvel characters would soon be seen around the parks in meet and greets, which is a welcome addition.  Overall, this particular pavilion represented the absolute best presentation at the Expo. 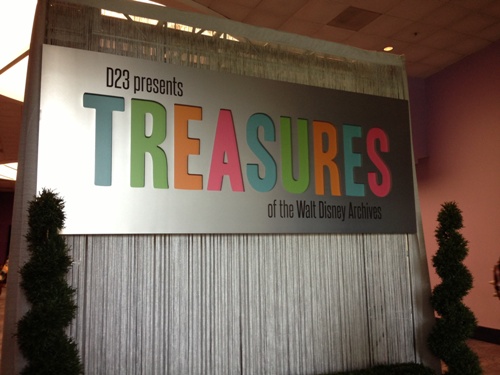 Though there was much shown on the show floor regarding the future of the Disney company, there was also welcome attention given to the company’s legacy in a showcase on the upper floors.  On the second level of the Convention Center, you would find the Treasures of the Disney Archives exhibit.  This section featureed actual pieces of movie memorabilia and artwork from the Disney Archives.  The years edition of the gallery was devoted to Disney’s many different takes on the tales from the land of Oz, as well as a special exhibit celebrating the 50th Anniversary of the classic Mary Poppins (1964).  The Oz section highlighted two Disney films that explored the Oz storylines beyond the MGM classic, those being 1985’s Return to Oz and 2013’s Oz: The Great and Powerful.  Most of the displays here featured actual costumes used in the films, along with some artwork and a handful of props.  Any fans of the films will certainly like what Disney put on display. 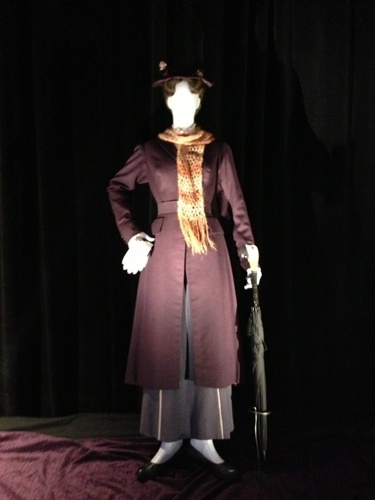 The next room, which of course was the more popular of the two, highlighted Mary Poppins.  The collection of the material in this room was very impressive; covering all aspects of the film from visual development to the film’s premiere.  Of course there were costumes on display, including Mary’s trademark nanny dress and flower hat, but there were also original matte paintings that played a big role in the film’s visual effects.  If you remember the shot in the film where Mary is sitting on a cloud above London and then it pans down to a city park where we’re introduced to Dick Van Dyke’s Bert; that particular matte painting was found here.  The highlight of this section however was the actual carousel horses used in the film.  This was a popular photo spot for many people, and of course I got my picture in front of them as well.  In addition to the classic film’s displays, there were also costumes on display from the upcoming film Saving Mr. Banks, including the suit Tom Hanks wore for the role of Walt Disney.  The exhibit concludes with a gallery devoted to fan art, some of which was quite good and it shows the beloved legacy that this film continues to have.  Overall, anyone who is a fan of Disney film history would love the Disney Archive exhibit. 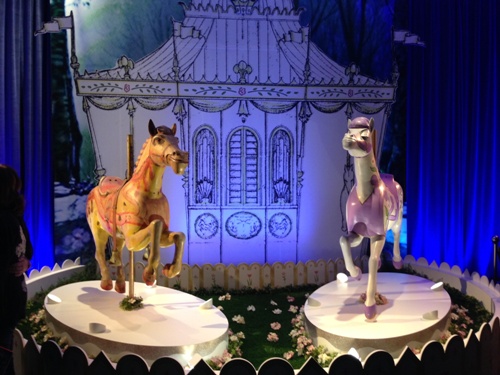 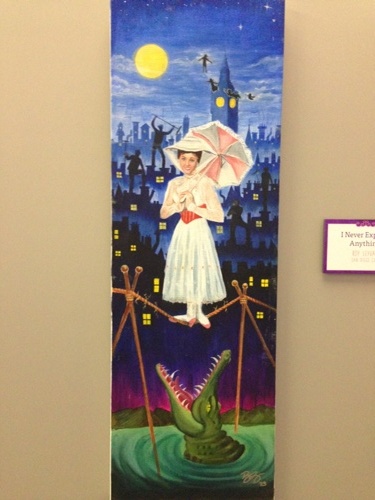 Speaking of the Disney Archive, chief Archivist Dave Smith held a special seminar at the D23 Expo highlighting the production of Mary Poppins.  It was basically a Power Point presentation led by Mr. Smith, but an excellently executed one which featured many never before seen material straight from the archive.  In particular, I really liked the showcase of outtakes from the film.  It’s interesting to see what the actors do onstage after the director yells cut;  in particular, Dick Van Dyke’s fooling around between takes gets a good laugh.  Later in the day, I attended another seminar called Pixar: Doing our Homework, which featured onstage a handful of Pixar’s top filmmakers.  The panel detailed the filmmaker’s experiences in researching for their films, and how much work goes into it, giving the audience a good insight into how their films are built from the ground up.  The panelists included directors Andrew Stanton (Finding Nemo, Wall-E) and Pete Doctor (Monsters Inc., Up), who recounted his experience visiting the tepuis of Venezuala on a research trip for Up. There were many other seminars going on throughout the three days of the Convention. Unfortunately, like most other conventions, you have to pick and choose which ones you’ll see, which is hard when so many of them are worth seeing. 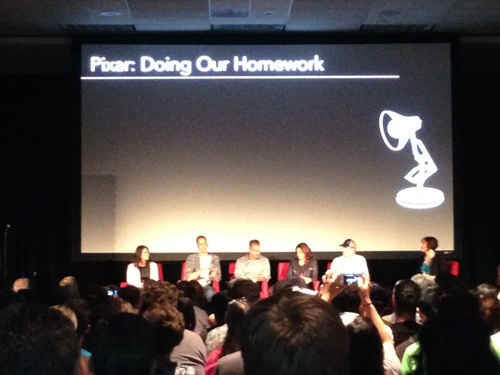 The big draw of the convention, of course, were the big presentations put on in the D23 Arena.  The Arena was the place where the Disney company presents all of their upcoming projects in spectacular fashion; with celebrity guests on hand and exclusive clips showing footage for the first time to the public.  I was unable to attend the showings regrettably, but I did learn that the films highlighted included Pixar’s next slate of films over the next few years (including Finding Dory, the sequel to 2003’s Finding Nemo), as well as the slate of live action films coming in the next two years, including Saving Mr. Banks, the Angelina Jolie-starring Maleficent (2014), the Kenneth Branaugh-directed remake of Cinderella (2015), and the very top-secret  Brad Bird film, Tomorrowland (2015).  Also, Marvel Films presented their upcoming movies, including the new Thor and Captain America films, and there was even a little tease for the upcoming Star Wars Episode VII.  These presentations more than anything else showcases Disney’s expanding influence, and it’s interesting to see a more varied platter of projects on display at the Expo. 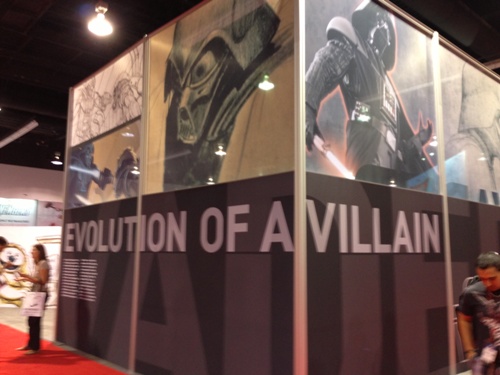 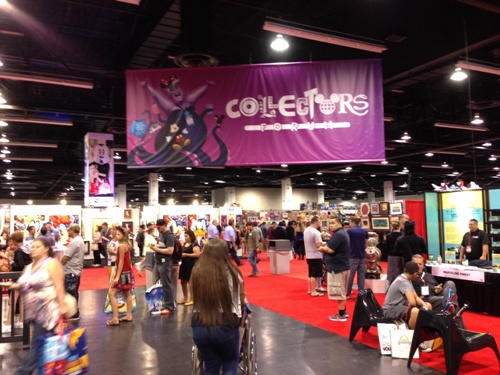 Of course, like most conventions, D23 also caters to the avid memorabilia collectors, and a large area called the Collector’s Forum is made just for them.  Here you’ll find small vendors selling everything from original art to special collectibles.  I found everything from original animation cels, to antique figurines, to even a collection of park maps there.  A silent auction was also being held for extra special items, including actual bobsleds from the Matterhorn attraction in Disneyland. Also on hand are special Disney celebrities to sign autographs.  On the day I attended, I found the voices of Belle and Ursula (Paige O’Hara and Pat Carroll) signing autographs in this room, both drawing a long line of fans to the floor.  The whole convention caters to all fans, but this is the section of the show floor where you see Disney fandom in it’s full form, and it’s a fascinating place all on it’s own. 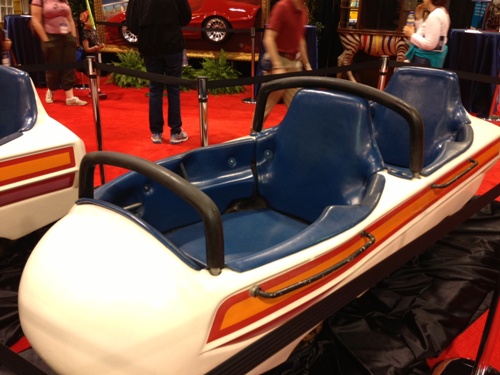 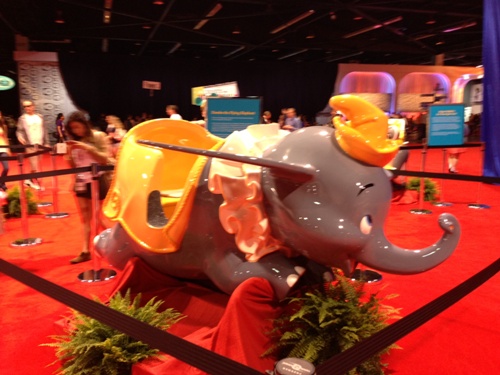 The D23 Expo was a fantastic experience overall, and I’m glad I made the time to visit it.  Maybe next time I’ll put more thought into the planning into my visit, so that I can take in the full experience.  At least this time, I got a sampling of what the convention has to share.  I enjoyed taking in all that the show had to share.  You can spend hours just on the main show floor alone.  The Archive exhibit was a particular highlight, as was the Imagineering pavilion.  For a movie history buff like me, I was happy to see such an impressive display presented for a classic film like Mary Poppins, and I hope future conventions have exhibits like it.  But, what impressed me the most about the convention is that each pavilion’s showcases were hosted not just by volunteers, but by the actual people who work for the Disney company.  I learned this while visiting the Disney Interactive pavilion where I got to play a demo of the upcoming Duck Tales Remastered video game.  When I spoke with the guy hosting the demo, I learned that he had actually worked on the game himself as a programmer.  He told me about how he grew up with the game as a kid, and how he came to work on the remake as an adult.  This experience showed me the special treat that the convention has to offer, where you not only get to experience all of the new products from the Disney company, but you also get to speak directly to the actual people who make it happen.  It’s a special experience that I recommend to everyone.  The next convention is in 2015, and I hope that it continues to grow and become even more of a special event in the years to come. 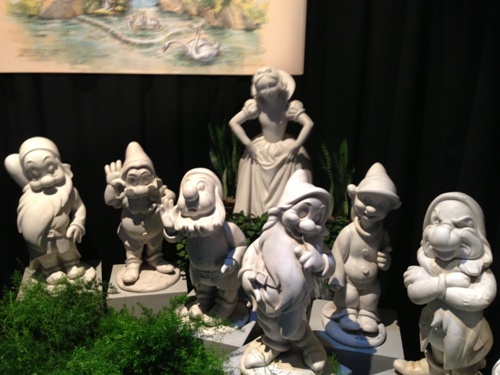 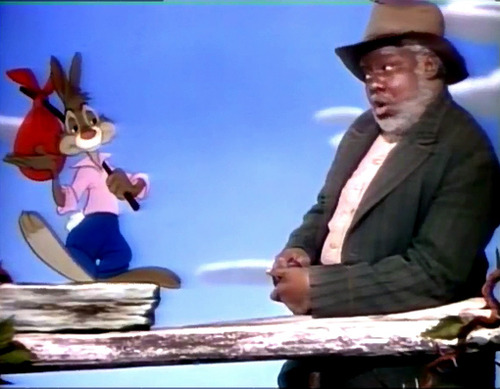